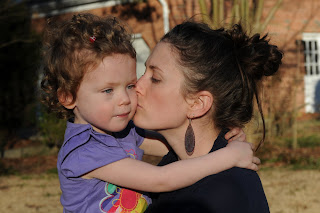 Having just arrived home from an incredibly warm visit to Virginia Beach I am feeling the need to warm the cockles of my heart with some reminiscing.  It took two planes and a drive to Buffalo in the middle of the night to get us there but our time with Tricia's cousins, aunt Cole (my sis' in law Nicole) and uncle Jer (my bro' in law) was worth 10 times the effort.  The kids played so great together and they exhausted each other so the adults could enjoy fun time together in the evenings: "Settlers of Catan" + Sushi = Fun.

We shopped (I love Trader Joes!), we ate, we played outside.  Nicole and I cooked fun things we felt like making and the kids made up hilarious moments enough for everyone.  Of particular hilarity was the extremely fun time they had during the great makeup fiasco of 2012!  We should have recognized the quiet sooner.... but Nicole and I were having such a lovely heart to heart over the dishes and sweet Kemmy was with us so surely nothing too crazy could happen??  Oh the calm before the storm. 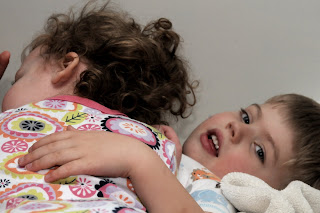 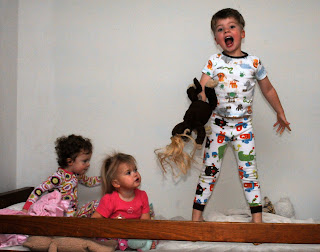 Looking back there were some sounds coming from upstairs that seemed peculiar.  Hmmm.  Upon our arrival at the scene what should we find but two war painted little people covered in every sort of makeup I packed.  Oh and did I mention they had covered the whole room, the sheets, bed spreads, pillow cases, walls and floors too?  Tricia had a smear of cover up in a clownish shape around her mouth and black mascara streaks down both cheeks.  She had also taken a brown pencil to her forehead and attempted to write a message.  Christopher was no better off and it literally took everything we had to stay stern and act upset for their sake.  Upon further questioning Christopher confessed he had thought maybe it wasn't a good idea but it had been Tricia who had in fact started throwing it around.  Surprising?  No.


That girl is so full of beans and sooo adorably impulsive!!! 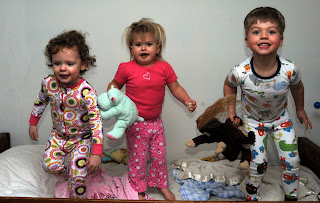 Now we are home and getting back into the swing of things here.  As usual Buffalo greeted us with a snow storm but nothing could get us down and dinner at Chili's (an American chain) gave Tricia another chance to make some more "friends".  I couldn't keep count but if I add the grocery stores, the airports, the planes and the restuarants she might well have made a new 50 friends.  Is it her curls or the way she asks everyone if they have lipstick or a "bum bum"?  The poor security guard at the airport thought she was interested in his badges only to discover she was making sure he knew he had a bum bum!  Oh my goodness.... Then there the santa-esque gentlemen waiting for the plane with us whom Tricia kept trying to convince me was Santa despite my informing her that men grow beards.  It was all settled nicely when the gentlemen approached us with a roguish smile and told us she "wasn't far off" while he displayed a photo on his phone in which he was indeed dressed exactly like SANTA!! Bahahahah....

So glad I am not shy or Tricia might just be the death of me!

PS - Monkeys on the bed was a favourite game but ironically was not the cause of Tricia's vacation black eye!  That was caused by a run in with her cousins 4 year old head while running through the house.

Welcome to The Kitchen Door

The comings and goings of a chef at home with 3 kiddos. Its busy at our house for lots of reasons and I love to share what we are learning as we grow.
Here I hope you will join in the fun as we navigate our way through life's adventures.